According to the 5-year economic development plan, the provinces and cities plan to make medium-term public investment for 2021-2025 to create a driving force for economic growth. According to the Department of Planning and Investment, Hanoi is the city with the leading medium-term public investment plan in the country, followed by second by Ho Chi Minh city , the third is Hai Phong, then Dong Nai and Binh Duong.

The provinces and cities that are in the leading group of the country in terms of medium-term public investment plans are all provinces with good economic development. Especially, the capital Hanoi and Ho Chi Minh city is the two largest and most diversified economic centers and an important traffic hub. 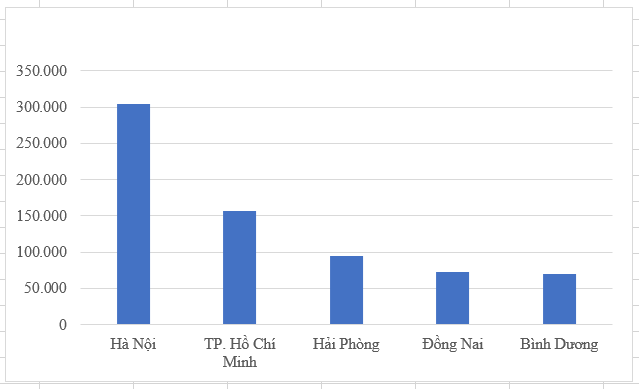 Five provinces have the highest public investment plans for the 2021-2025 period. Source: Department of Planning and Investment of localities.

This is an abundant source of capital, making an important contribution to meeting the development requirements of the city. Hai Phong will spend most of the public investment capital to implement major projects such as Ring Road 2, Ring Road 3, the city’s administrative-political center, important intersections, etc.

In Dong Nai, according to the plan, the province expects the medium-term public investment capital in the 2021-2025 period to be about VND71,979 billion. In which, the local budget is about 60,694 billion VND, the central budget is 11,284 billion VND.