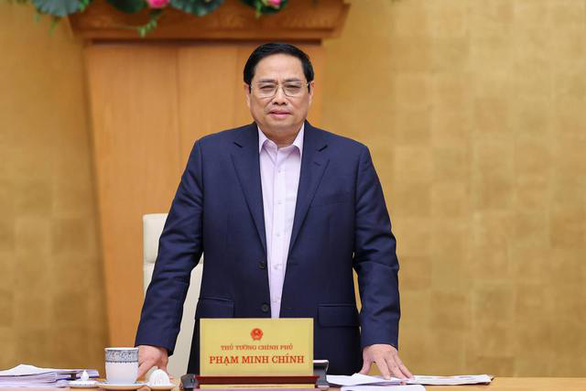 On June 4, Prime Minister Pham Minh Chinh chaired the regular Government meeting in May 2022, focusing on discussing the socio-economic situation, the implementation of the socio-economic recovery and development program, the allocation and disbursement of public investment capital and the state budget in May and the first 5 months of the year.

In the context of the world economic situation with many complicated developments due to strategic competition between countries, the war in Ukraine is still protracted and difficult to predict, the Prime Minister assessed this situation has had an impact on the global economy, growth slows down, inflation risks, input material prices soar, especially oil prices.

In the country, the situation of the COVID-19 epidemic has been brought under control, many major and important events have taken place, the 5th Plenum of the Central Committee of the XIII term has ended successfully, discussed and decided on many important issues on land, collective economy and agriculture, farmers and rural areas.

The 3rd session, the 15th National Assembly opened and is taking place with excitement and quality. SEA Games 31 was a great success, continuing to affirm and promote the image of the country, people and sports of Vietnam. External activities, especially high-level foreign affairs, were actively, rhythmically and effectively deployed.

Also in the month, the Government continued to handle outstanding issues such as loss-making projects, weak credit institutions, and a number of public investment projects that were delayed and delayed for many years. Dealing with some arising problems such as capital market, inflation, increase in gasoline prices, increase in input material prices, etc., the socio-economic situation in all fields has prospered.

With effective disease control, vaccine coverage and reopening of the economy, Vietnam increased 48 places, ranked 14th in the Nikkei Asia COVID-19 Recovery Index. To support economic recovery, the Government has issued 6 decrees, the Prime Minister has issued 4 decisions to implement the recovery and development program.

We continue to uphold our independence, sovereignty, territorial integrity, political stability, security, social order and safety. Anti-corruption work, investigation and handling of cases have been actively implemented. Negotiating border demarcation and marking has been accelerated. People’s lives are improved.

However, the Prime Minister acknowledged that the life of a part of people is still difficult, especially in remote, border and island areas, those affected by COVID-19. Disbursement of public investment needs more effort. It is necessary to continue to perfect the documents guiding the implementation of the program of socio-economic recovery and development.

Some problems related to textbooks and medicines need more effective and positive solutions to meet the wishes and requirements of the people.

In a report on the socio-economic situation, the Ministry of Planning and Investment said that the CPI in May increased by 2.25% over the same period last year, the average core inflation in 5 months was 1.1%. The money, credit, and foreign exchange markets are basically stable and have good liquidity.

The manufacturing industries all prospered, typically the industrial production index increased by 8.3%, processing and manufacturing alone increased by 9.2%.. Total retail sales of consumer goods and services is estimated at 2.2 million billion VND, up 9.7%, if excluding the price factor, it will increase by 6.3%.